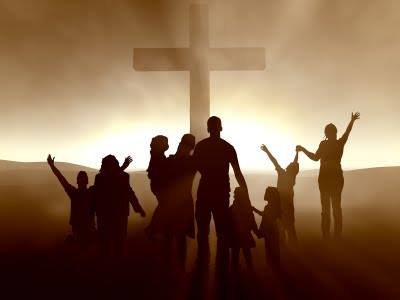 For to us a child is born, to us a son is given, and the government will be on his shoulders. And he will be called Wonderful Counselor, Mighty God, Everlasting Father, Prince of Peace. Of the greatness of his government and peace there will be no end. He will reign on David’s throne and over his kingdom, establishing and upholding it with justice and righteousness from that time on and forever. The zeal of the LORD Almighty will accomplish this. (Isaiah 9:6-7)


Mighty God! A Wonderful Counselor that is also Mighty? YES! This is the King of kings! He is not a man-made "guessing-game" type of god who oversees varying parts of our world and culture. No, He is intimate and real, and His headship rules over our entire universe - all time, space, matter - everything we know and do not know. He has all power over all things at all times and in all ways. He is omnipotent, omnipresent, omniscient... the Almighty... the great I AM.

This Mighty God, Who was, and is, and is to come, humbly gives himself TO US... offering Himself as Savior. To us... He declares Himself Messiah and bids every man, woman and child to receive Him (and ONLY Him) in order to escape the clutches of death. For without Jesus, all life would perish. And He proves His love daily by providing us everything we need for food, clothing and shelter - all from renewable resources sustained by His power as the preserver of man and beast! In fact, scripture tells us in Job 38 that the seas which cover most of the earth, and over which we are powerless, would overwhelm us if God did not proscribe their limits. Read God's Words spoken to Job... read what He rules and oversees each day - FOR US!

Clearly, nothing is too hard for the Lord, ladies! Clearly nobody is as mighty or holds the power of THIS GOD. Everyday, let us remember to celebrate His authority. Let us rejoice always, acknowledging His sovereign reign! Let us be grateful for His undeserved mercy and grace. We are blessed because He loves us!!! As His people, let us lay aside all distraction of false gods, of all idols, of all Antichrist. Let us live our lives looking upward to His leadership, living as His devoted. Living for the One who brings us LIFE - the true Savior and King, Jesus Christ the Lord! Hallelujah to the King of kings for He is mighty to save and redeem us from our sin! He is very real! He is Yahweh, Jehovah, the living God!

The God who made the world and everything in it is the Lord of heaven and earth and does not live in temples built by hands. And he is not served by human hands as if He needed anything, because He Himself gives all men life and breath and everything else. Therefore, since we are God’s offspring, we should not think that the Divine Being is like gold or silver or stone – an image made by man’s design and skill. (Acts 17:24-25, 29)

To us... to us, this King has come to earth as a lowly man in order to sacrifice and save... in order to give His people everlasting LIFE! This is JESUS THE MIGHTY CHRIST...

Who, being in very nature God, did not consider equality with God something to be used to his own advantage; rather, he made himself nothing by taking the very nature of a servant, being made in human likeness. And being found in appearance as a man, he humbled himself by becoming obedient to death - even death on a cross! Therefore God exalted him to the highest place and gave him the name that is above every name, that at the name of Jesus every knee should bow, in heaven and on earth and under the earth, and every tongue acknowledge that Jesus Christ is Lord, to the glory of God the Father. (Philippians 2:6-11)

Blessed is the man who makes the Lord his trust, who does not look to the proud, to those who turn aside to false gods. (Psalm 40:4)

As the Lord zealously gives Himself to us, let us unreservedly give ourselves today (and every day)... TO JESUS!