walking through the fire 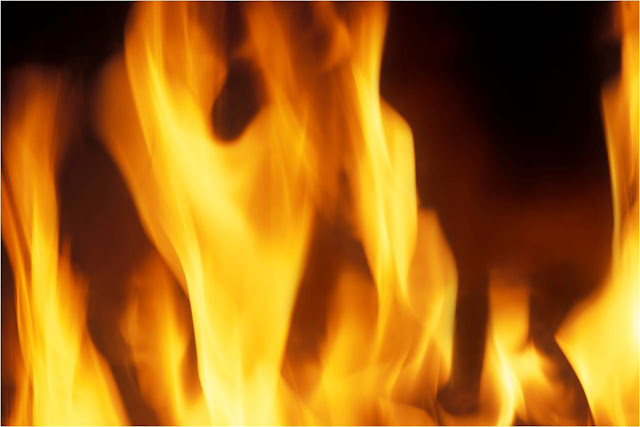 Have you found yourself questioning God's motives?
Perhaps you asked God to protect your baby, but you lost your precious child.
Maybe you pleaded with God to heal someone from cancer, but they just found out that the cancer is spreading in their body or perhaps have just died.
Or you begged God to save your marriage, but your husband ended up leaving you and your children... alone.

Do you question... If God is able to do anything - if He is so powerful... why does He allow horrible things to happen?

Shadrach, Meschach and Abednego are three of my favorite figures in the Old Testament. They offer a terrific example of three men who knew that God COULD save them, but they also trusted God EVEN IF He chose not to do so.

Let me paint the picture described in Daniel Chapter 3. King Nebuchadnezzar (Neb) built a statue of gold... an idol... and ordered his entire kingdom to bow down to it when he had his musicians play a particular music. All nations under Neb in every language would be required to worship the image of gold or they would be thrown into a furious, raging fire! YIKES! Neb hears that three men did not bow down as told. Shadrach, Meschach and Abednego are brought before the king to explain themselves. He questions them, "Is it true, Shadrach, Meshach and Abednego, that you do not serve my gods or worship the image of gold I have set up? Now when you hear the sound of the horn, flute, zither, lyre, harp, pipes and all kinds of music, if you are ready to fall down and worship the image I made, very good. But if you do not worship it, you will be thrown immediately into a blazing furnace. Then what god will be able to rescue you from my hand?" (Daniel 3:14-15)

Here is how the three men responded in faith to the intimidating king... "O Nebuchadnezzar, we do not need to defend ourselves before you in this matter. If we are thrown into the blazing furnace, the God we serve is able to save us from it, and He will rescue us from your hand, O king. But even if He does not, we want you to know, O king, that we will not serve your gods or worship the image of gold you have set up." (Daniel 3:16-18)

"But even if He does not..." Wow. EVEN IF God would not do as they hoped... EVEN IF the outcome would not match their desired results... EVEN IF... now, that's faith. I encourage you to read the rest of this story... it is just awesome! Read on.

Then King Nebuchadnezzar leaped to his feet in amazement and asked his advisers, "Weren't there three men that we tied up and threw into the fire?"
They replied, "Certainly, O king."

He said, "Look! I see four men walking around in the fire, unbound and unharmed, and the fourth looks like a son of the gods."

Nebuchadnezzar then approached the opening of the blazing furnace and shouted, "Shadrach, Meshach and Abednego, servants of the Most High God, come out! Come here!"

So Shadrach, Meshach and Abednego came out of the fire, and the satraps, prefects, governors and royal advisers crowded around them. They saw that the fire had not harmed their bodies, nor was a hair of their heads singed; their robes were not scorched, and there was no smell of fire on them.

Then Nebuchadnezzar said, "Praise be to the God of Shadrach, Meshach and Abednego, who has sent his angel and rescued his servants! They trusted in him and defied the king's command and were willing to give up their lives rather than serve or worship any god except their own God. Therefore I decree that the people of any nation or language who say anything against the God of Shadrach, Meshach and Abednego be cut into pieces and their houses be turned into piles of rubble, for no other god can save in this way."

Then the king promoted Shadrach, Meshach and Abednego in the province of Babylon. (Daniel 3:19-30)

God is faithful to His children. Here we see that God was faithful to Shadrach, Meshach and Abednego in spite of their being thrown into a fiery blazing furnace! It is a wonderful example to read this story... seeing the fourth man (God) joining these three faithful servants and walking alongside with them in the fire. No, He didn't remove them from the problem... He didn't make things happen easier... but He was with them! And the end result proved fruitful in that king Neb was proclaiming, "Praise be to God!!!" And isn't that the message we are to be sharing with others? PRAISE BE TO GOD! Glory be HIS name!

Ladies, when life doesn't go the way you hoped and your stuck in a blazing furnace of misfortune... Will you choose to trust that God is still good? Will you resolve to not bow down to disbelief? Will you avoid giving into fear? Will you wage war against disappointment and choose to TRUST YOUR GOD.... EVEN IF?

I promise you, the circumstance may not turn out the way you had envisioned....but our loving Savior promises to walk alongside you... with you through the fire. He will never leave you or forsake you. He will always be YOUR God! Trust in His faithfulness. Trust in His promises... all things will ultimately work together for His GOOD! And He is GOOD!