let there be light 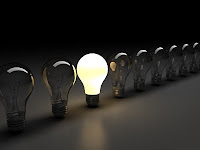 Let there be light...

In the beginning God created the heavens and the earth. Now the earth was formless and empty, darkness was over the surface of the deep, and the Spirit of God was hovering over the waters. And God said, "Let there be light," and there was light. God saw that the light was good, and He separated the light from the darkness. God called the light "day," and the darkness he called "night." And there was evening, and there was morning—the first day. (Genesis 1:1-5)

Isn't it interesting that God's initial decree of light is not the light of the sun? In fact, according to scripture, the sun, moon and stars were created on day four in the creation account. So what gave our new earth this "good" light approved by the Spirit of God? What separted our planet from darkeness and allowed the very first evening and morning to occur?

Let's look at John 9 - where Jesus restores the blind man's sight. Read with me these verses:

As he went along, he saw a man blind from birth. His disciples asked him, "Rabbi, who sinned, this man or his parents, that he was born blind?" "Neither this man nor his parents sinned," said Jesus, "but this happened so that the work of God might be displayed in his life. As long as it is day, we must do the work of him who sent me. Night is coming, when no one can work. While I am in the world, I am the light of the world." Having said this, he spit on the ground, made some mud with the saliva, and put it on the man's eyes. "Go," he told him, "wash in the Pool of Siloam" (this word means Sent). So the man went and washed, and came home seeing. His neighbors and those who had formerly seen him begging asked, "Isn't this the same man who used to sit and beg?" Some claimed that he was. Others said, "No, he only looks like him." But he himself insisted, "I am the man." "How then were your eyes opened?" they demanded. He replied, "The man they call Jesus made some mud and put it on my eyes. He told me to go to Siloam and wash. So I went and washed, and then I could see."

Isn't it interesting that this disabled man was blind from birth? I find it also interesting that the disciples first question to God about his blindness was, "Why?" Why was he blind? What sin did he or his parents do to cause such a horrible situation to come about? Why God... why? But look at Jesus answer, "Neither this man nor his parents sinned," said Jesus, "but this happened so that the work of God might be displayed in his life. As long as it is day, we must do the work of him who sent me. Night is coming, when no one can work. While I am in the world, I am the light of the world."

Wow, let there be light indeed! For here in these passages, Jesus claims Himself as the Light of the world. Jesus is the physical, viewable personhood of the Spirit of the Most Divine. He is God in human flesh. He is the good light that separates our days and nights. Here in John chapter 9, Jesus showcases His governance over our universe by healing a man who was unable to see light. He repaired what could not be repaired. He restored what could not be restored. And how did Jesus do this? How did he change this man's life and allow Him the priviledge to see? With the very earth that God originally formed man in His own image. With the ground He created for man's feet to tread. He covered the man's eyes with mud and then told him to wash it off in order to see.

Notice that the blind man could not obtain his sight or be saved from his trial without first choosing to obey Jesus. In order to be healed, he had to first do as Christ instructed. He had to follow-through in His belief. So he "went and washed"... afterwhich He could see. WOW! What a testimony. For I'm sure this man had endured much ridicule and sorrow from unkind strangers. I'm sure he was pitied and scoffed at and viewed by others who knew him as helpless or worthless. So, this blind man could have thought Jesus to be another hurtful or even unkind person... someone just messing with his condition and giving Him false hope. Sure, the blind man's response could have been to rub the mud from his eyes with his hands and respond in anger or pride while refusing our Lord's offer. But instead, he obeyed.


Note: I'm sure it was no small feet to find the place Jesus told Him to go wash either. He had to do the work to find his way to the pool where God sent him. But, ahh, the reward he received. Can you imagine his eyes intaking the light for the first time? Can you imagine the joy... the splendor... the miracle? Once blind, this man could now see! He was restored, renewed. The Light of the world had revealed Himself... and this man saw that He was good! And now, this man once blind could not move forward in His new life without showcasing and displaying God's glory. For it was impossible for those who knew him before to miss the change. It was impossible to ignore the proof of restoration and the message such evidence conveyed... Jesus can heal what man cannot! Jesus can save where man cannot! JESUS IS LORD OF ALL!

As a believer who claims Christ as King, my life must also be one that displays God's glory. Just like the blind man, I must be willing to obey Jesus' instruction in order for me to be blessed and renewed... to see and experience His Light! In Matthew 5 when Jesus began to preach, He instructed His followers, "You are the light of the world. A city on a hill cannot be hidden. Neither do people light a lamp and put it under a bowl. Instead they put it on its stand, and it gives light to everyone in the house. In the same way, let your light shine before men, that they may see your good deeds and praise your Father in heaven." (Matthew 5:14-16)

Did you get that? Not only is Jesus the self-proclaimed Light of the world, but he has called his people to shine His light... to represent Him before men. Why? So that others will see His goodness through our good deeds - the work of God. So that God may receive all the glory and praise.

Ladies, our universe cannot exist without God's Light. Evening and morning cannot continue without the presence of the Master. In His love, God commanded, "Let there be light," and gave mankind a home of priveledge to walk in His image... to glorify His magnificence... to be a beacon of His love... to know Him intimately. But sadly, our decision to sin and seek selfishness defiled man's sight, corrupting our hearts. Our vision was lost and we became blind, lost, poor, pitiful. But thankfully, the Savior... our loving, merciful Savior offered Himself as a sacrifice to cleanse us of this handicap and restore us to completion. He made Himself human... earthly... from the dust of the ground... so that we may receive Him and eternally know His glory firsthand. Jesus dying on the cross and raising Himself from death proves that Jesus can heal what man cannot! Jesus can save where man cannot! JESUS IS LORD OF ALL!

If we faithfully believe and obey Him... if we live seeking after His blessed gift of restoration... we will be able to admire and enjoy His majesty and love forever. In turn, we will be blessed to worship and know Him as we live mirroring His image. We will glorify Him by shining His presence to others. We will beam in victory because He is the Light that has shown us the safe path home to His kingdom! Can you see Him? Are you even looking?

I ask you to consider these questions: Does your life display God's light? Does your heart showcase His headship? Do your actions resemble His ways? Does your message claim His grace? Does your world spotlight a Savior? For He is indeed good and instructs us to share His message of redemption TODAY...

Ladies, this is the day... let there be LIGHT!