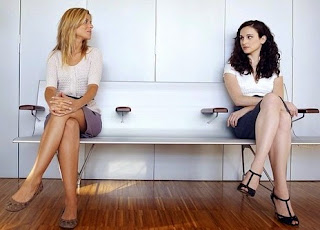 We women sure do have a bad habit of comparing one another.  We regularly identify our similarities and differences.  We consider who we are... what we have... and then measure it against who others are, and what they have.  Ultimately, our assessment leads us to one of two outcomes:  (1) we become proud and judgemental or (2) we feel defeated and lacking.

In the end, we want to compare better than anyone else.  Prettier, smarter, more organized, more important...  we want to have more... to be more.  But more of what?  Or rather, more of whom???  Clearly, there is always something more to be had... a better car, a nicer home, a thinner waistline, a happier disposition.

But Paul said, "We do not dare to classify or compare ourselves with some who commend themselves. When they measure themselves by themselves and compare themselves with themselves, they are not wise. We, however, will not boast beyond proper limits, but will confine our boasting to the sphere of service God himself has assigned to us." (2 Corinthians 10:12-13)

Hm.  Are we behaving unwisely?  For what purpose and good comes from sinful people comparing themselves with themselves?  The fact is, we are all unrighteous.  We are all broken.  We are all wretched without the redeeming salvation of Christ's covering.  It really doesn't matter what "more" we could attain.  If we don't have Jesus, we will always be lacking, defeated, unsatisfied.  Without the security and magnitude of God overshadowing us, mankind is undeniably doomed to succeed.  For no one, from beginning to end, can survive or flourish without God’s abundant provision of grace and His gift of righteousness through Jesus Christ.

Therefore, just as sin entered the world through one man, and death through sin, and in this way death came to all people, because all sinned. To be sure, sin was in the world before the law was given, but sin is not charged against anyone’s account where there is no law. Nevertheless, death reigned from the time of Adam to the time of Moses, even over those who did not sin by breaking a command, as did Adam, who is a pattern of the one to come. But the gift is not like the trespass. For if the many died by the trespass of the one man, how much more did God’s grace and the gift that came by the grace of the one man, Jesus Christ, overflow to the many! Nor can the gift of God be compared with the result of one man’s sin: The judgment followed one sin and brought condemnation, but the gift followed many trespasses and brought justification. For if, by the trespass of the one man, death reigned through that one man, how much more will those who receive God’s abundant provision of grace and of the gift of righteousness reign in life through the one man, Jesus Christ!  Consequently, just as one trespass resulted in condemnation for all people, so also one righteous act resulted in justification and life for all people. For just as through the disobedience of the one man the many were made sinners, so also through the obedience of the one man the many will be made righteous. The law was brought in so that the trespass might increase. But where sin increased, grace increased all the more, so that, just as sin reigned in death, so also grace might reign through righteousness to bring eternal life through Jesus Christ our Lord. (Romans 5:12-21)

Ladies, it is not wise to compare ourselves with one another.  There is nothing healthy to be gained in wanting more of anything that is from this corrupt world.  Rather, we are to seek after God's higher Ways - looking first and always to His Kingdom, His righteousness. We are to model our hearts, intentions, and deeds against the perfect example of Jesus, to whom no one can compare.  We are to put on and wear Jesus always... displaying His image over our own self.

Thankfully, God's grace allows every follower of Christ to live justified under His Name, His image.  So, rather than unwisely compare ourselves with others, God calls us to encourage and uplift one another in His love as we individually serve His kingdom with the gifts and talents that our Creator has uniquely blessed us with.

Many, Lord my God, are the wonders you have done,
The things you planned for us.
None can compare with you;
Were I to speak and tell of your deeds, they would be too many to declare. (Psalm 40:5)

The heavens praise your wonders, Lord,
Your faithfulness too, in the assembly of the holy ones.
For who in the skies above can compare with the Lord?
Who is like the Lord among the heavenly beings?
In the council of the holy ones God is greatly feared;
He is more awesome than all who surround him.
Who is like you, Lord God Almighty?
You, Lord, are mighty, and your faithfulness surrounds you.

Righteousness and justice are the foundation of your throne;
Love and faithfulness go before you.
Blessed are those who have learned to acclaim you,
Who walk in the light of your presence, Lord.
They rejoice in your name all day long;
They celebrate your righteousness.
For you are their glory and strength,
And by your favor you exalt our horn.
Indeed, our shield belongs to the Lord,
Our king to the Holy One of Israel.
(Psalm 89:5-8; 14-18)

Today, I encourage you to stop wasting precious time looking away from God.  Stop living unsatisfied outside His path.  Instead, focus all your effort, all your attention, onto Jesus.  Love Him with all your heart, soul, mind, and strength.  Put on His armor and wear His Way.  You are justified in His grace.  You are alive, right now, to glorify His image.  You are important because He loves you more!  So, find your "more" in Him.

Friends, the Lord gave us one another for building up rather than tearing down.  So, let us ask Him for the strength to stop our unwise comparison habit, and instead spend our time boasting confidently in the Lord - sharing His great love to all the world!  With all our heart, soul, mind, and strength... this is the day to lay down all distracting selfishness and LOVE LOVE LOVE like Jesus!!!