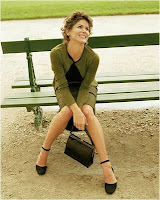 Many years ago, I was invited to attend a special show hosted at a posh location in a wealthy suburb of Chicago. The show would feature a runway event showcasing different models and outfits, and would be hosted by a famous celebrity style expert recognized from many media venues: television make-over shows, magazines, etc. The whole swanky event was thrilling fun to experience and enjoy with my fellow fashionista friend who nabbed the tickets. We amused ourselves by critiquing all the models... their outfits... their ability to hold a pose just so... all the while feeling very vogue as we enjoyed the girly-girliness of the whole event. It was great fun.

After the show was finished, Mr. Celebrity Style Guru decided to take time out of his busy schedule to meet various people who had attended the event.... "the little people", if you will. Now, in the world of stardom, this person is highly regarded in his industry as somebody who knows what and what not to do... But in reality, he holds no real training or education in his field. However, he and his agent have worked the system well enough so that he is now recognized internationally. As a result, Mr. Celebrity Style Guru is quite wealthy and can be critical to those who hold a different taste to that of his and his associates. As I watched him "work" the room, it was comical to watch the women around him. If the man had a ring on his finger, they would have been on their knees kissing it. They were wooing...WOOING over him. (Did I just use the word "woo" in my blog - ROFL.) It was like being in a room filled with star-struck school girls soliciting a rock-n-roll singer's attention - all because of a celebrity status and heafty financial bank roll. It was ridiculous.

When all was said and done, my friend and I decided to further peruse the merchandise that was on display in varying sections of the room. (Sadly, nothing would properly fit my right leg much less my whole body...but that's a different matter altogether.)

Anyway, I turned a corner and there standing directly in front of me was Mr. Celebrity Style Guru himself!!! Looking right at me, he eyed me up and down. From his mere presence, I actually felt a breeze (just kidding). He proceeded to critique my attire and comforted me that my outfit was indeed suitable and accessorized to his liking. Then he looked at me - waiting for a gushing response... Yes, I believe he actually expected me to gush the same sentiments as the others had before me. I looked at him and said, "Thank you. This is a lovely event. You have an interesting job, don't you?"

Now mind you, I meant no disrespect. I didn't really mean anything. My background was in Human Resources, mainly Staffing and Recruiting, so it was natural for me to be looking at his "job" in an objective fashion (no pun intended). But Mr. Celebrity Style Guru looked at me amazed. He was absolutely speechless and, I think, a little annoyed that I had not shown him more reverence to WHO he was. Nonetheless, I now stood in front of a man absolutely void of words because my statement did not provide any sense of worship to his presence. When I realized he was looking at me bewildered and expecting so much more, I decided it was time to graciously excuse myself from his ego and move into the next room to look at the handbags. (I love a good handbag... again, a different matter altogether.)

Anyway, the experience made me very aware of how the mass public can become consumed to show favor to the rich and renown. It is a little scary to see how so many are, well... sheep. Look at our society. A world filled with people consumed with reinventing themselves so that they are the NEXT BIG THING! It is no secret that in general mankind defaults to honoring and revering the rich and famous.... the bold...the beautiful. We see this all the time with Hollywood celebrities and boisterous entrepreneurs. Just turn on the television and I guarantee in less than thirty seconds, you will be mesmerized by someone fitting the description.

Unfortunately, we Christians can also be at fault to succumb to this horrible behavior. In schools, clubs, universities - we form socially acceptable cliques and class levels of elitism. Our attention to status is down right embarrassing when we consider Jesus command to "love one another"... instead we are more prone to follow our own motto of "love only this group or that person" as long as it suits ME and MY desires.

Worse yet, it is most tragic when our local churches and Bible study groups get their values confused and cater to their rich and famous attendees while ignoring, or even rejecting, the poor and disgraced of this world who bravely come to worship with the hope of finding a loving fellowship of believers. What is wrong with this picture?

Mark Twain once defined "civilization" as "a limitless multiplication of unnecessary necessities," and he was right. In fact, many Christians are infected with covetousness and idolatry and don't even know it. They think that Paul's admonition in 1 Timothy 6 applies only to the tainted rich and famous and not to themselves.

The Bible Exposition Commentary says it this way, "There are perils to prosperity (Proverbs 30:7-9). Wealth can choke the Word of God (Matthew 13:22), create snares and temptations (1 Timothy 6:6-10,17-19), and give you a false sense of security. People say that money does not satisfy, but it does satisfy if you want to live on that level. People who are satisfied only with the things that money can buy are in great danger of losing the things that money cannot buy." Oh Lord, help me not to live on that level.

Ladies, God is not impressed with money or celebrity. He does not hold stock in man's definition of success, satisfaction, and security. Wealth cannot keep anyone alive when their time comes to die, nor can it buy back the opportunities missed while thinking of personal gain rather than focusing on God and others in need. Jesus made it clear that TRUE LIFE does not come from an abundance of things, nor does true success or security. We must make sure we are not drawn to covetousness. We must guard against worshiping idols... any idol! To be impressed with anyone or anything that does not first give glory to God Almighty is to be hypocritical as we avoid showing favor FIRST to our King of kings. Does he not command our first fruits? (See Deuteronomy 26:1-15)

On March 11, 1856, Henry David Thoreau wrote in his journal, "A man is rich in proportion to the number of things which he can afford to let alone."

So what or who is really important? I have to frequently ask myself if I would treat a prostitute the same as I would treat a famous intellect, missionary or world leader visiting my church... They are no different in God's eyes, so should they be different in my own eyes? Should I respect one less than the other? Is a political figure's soul more worthy of my attention than a beggar's? I don't think so. Nor should I feel superior or inferior. The Bible says in Job 34:19, "Who shows no partiality to princes and does not favor the rich over the poor, for they are ALL the work of His hands?"

The facts are pretty simple... All men are the same in God's economy. All have sinned and require a Savior. All seek love. All need Jesus.

Ladies, do not be deceived by fortune and fame, status and standing... no one person is better than another. No person except Jesus Christ should receive our worship and devotion. Be very, very careful who you praise and esteem highly. If you admire anything, admire what is done in Jesus Name. If you are impressed by anyone, be impressed with those that work for the sake of His call. Do not be swept up in that which is not permanent. For everything you see will one day be dust. Every person you meet was made from dust and will return to dust.

What matters most is what happens in eternity and who among mankind will gain the wealth of our Savior's presence. So, treat everyone with respect and share the gospel with as many as you are able. For, we are all the same in the eyes of God. No one is over another except Christ who is over us all.

He is the rich and powerful King of all eternity! He ALONE is worthy of our praise!