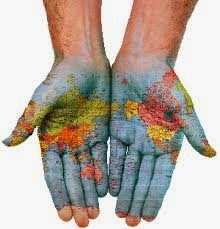 I invite you to join me as I sit down and chew over Jesus' story in Luke 16 concerning the rich man and Lazarus.  Among all the stories that Christ shared with His followers, this particular nugget remains unique to me.  Why?  Because in it, Jesus shares a vivid picture of the future of some very specific individuals.  From this, I am forced to wonder if the characters in this story are, in fact, real-life examples.  For only the Lord could know the outcome of someone's fate after the grave.  And only the Messiah could teach and warn us about what is to occur past the limitations of human life.  So without further adieu, let's begin with Jesus' narration in Luke 16.

"There was a rich man who was dressed in purple and fine linen and lived in luxury every day. At his gate was laid a beggar named Lazarus, covered with sores and longing to eat what fell from the rich man’s table. Even the dogs came and licked his sores. The time came when the beggar died and the angels carried him to Abraham’s side. The rich man also died and was buried."  (Luke 16:19-22)

When I read about the first of these two men (the rich man), what comes to mind is our society's normal delusion of success.  This "rich" man enjoyed the very best that life could offer: expensive clothing, the choicest food and wine, a grand estate, and all the luxuries of life.  If he were a man of this century, he would assuredly own all the latest gadgets and drive the fanciest automobiles.  He would be garbed head to toe in designer fashions and be groomed with the latest trend-setting styles.  Furthermore, he would likely be famous - a modern-day celebrity, if you will.  In the time of Christ, his dress and food would have definitely set him apart from that of an ordinary citizen. So basically, this man would have represented the standard that every Pharisee, every Jew, would have strived to become.

In contrast, there was Lazarus sitting at the opposite end of the social meter.  Lazarus is painted, quite simply, as a poor forgotten nobody struggling to survive.  He is sick. He is starving. Mostly, he is ignored - especially by the rich man.  Regularly, the rich man passes Lazarus as he comes and goes from his home.  Instead of offering him aid, the rich man closes his heart and overlooks Lazarus' need.  Days, months, years go by and the rich man continues to selfishly enjoy his wealth - never giving or loving beyond his own appetite.  Could he have done more?  Sure.  Could he have used his material resources to bring glory to God's kingdom.  Of course.  But does he...?  Hmmm, not so much.  No.

Meanwhile, Lazarus continues to hope through his struggles.  Although he doesn't receive anything from the rich man, he selflessly and quite literally gives of himself to the nearby stray dogs who are also in dire need... providing them nourishment from the sores on his own broken-down body.  Wow.  What a difference these two men are in character from one another.

By today's standards, those of us capable of reading these words online are indeed rich.  And just like the wealthy man noted in Jesus' story, we don't have to look very far to identify who around us is poor, lost, broken, and in need.  The least of these are right outside our own gates... evident and available.  Yet, many of us pretend they don't exist.  Many of us overlook their cries each and every day.  Many of us care more about our bank account, our closet, our supper.  While doing everything socially right, we (like the rich man) are living our lives spiritually bankrupt.  While treasuring and attaching ourselves to earthly idols, we overlook God's opportunities and thus forgo more important eternal rewards.  Just like the rich man in this story, our default is not to give.  Our priority is not to love beyond our own comfort zone.  Our real-life reaction to show any form of charity is applauded only in theory by our peers at posh benefits and at arms length.  Still the poor, the widowed, the orphaned, the desperate, the lonely, the lost and forgotten remain outside our gates... hoping.  Lord, forgive us and change our ways to your higher Way!

As we wrap up today, looking at the two fellows outlined in Christ's story, don't you find it interesting that Jesus chose to honor Lazarus by name, yet He dishonors the rich man by keeping him anonymous?  I mean, wouldn't the rich man's name be noteworthy to this story?  He was a big deal, right?  He was a headliner!  No... not according to Christ.  For the man who cares only for himself might as well be nameless to God.  Why?  Because they are spiritually dead.  Jesus says he recognizes us by the fruit we bear, and this man was void of The Holy Spirit's fruit.  Sure, he was wealthy in bank-roll, but tragically he was indifferent to the needs of the poor who greatly matter to the Lord.  In fact, read how personally Jesus looks at our treatment of the poor...

The King will reply, "Truly I tell you, whatever you did for one of the least of these brothers and sisters of mine, you did for me."  (Matthew 25:35-40)

When the time came for these two men to die, Lazarus was treated like a true MVP - carried up on the shoulder's of angels to commune with Heaven's most notable and regarded greats.  How wonderful it must have been for Lazarus to finally be welcomed home into God's eternal family.  There is no greater honor than to be adopted by the abundant King of kings!  Hallelujah!

But the rich man, the man who lived big and enjoyed all the bounty and success of human life... well, scripture says he died and was buried.  His was a sad, wasted life that ended without knowing God.

So, what will you take away from the beginning of this story?  What commands from the Master will you rethink and obey?  Is your default action not to give?  Is your priority not to love beyond your own comfort zone?  Jesus reminds us how much He loves the poor... how important those considered least are to Him.  So, are they equally, evidently important to you?  If so, what will you do today?  Whom will you love most?