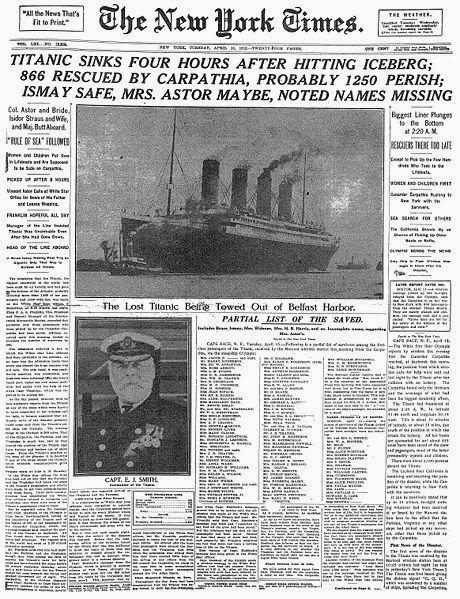 This story is so important and profound, I had to share with y'all.  I hope you will share it too.  Love!  ~Victoria

If you saw the movie "Titanic," you know much of what took place 102* years ago tonight, when the ship that even God couldn't sink, DID sink. Of the 1,528 people who ended up in the icy water, only six were rescued. But did you know that one of those six was actually saved twice that night?

His story is an inspiring reminder that there's more to life than mere survival.

To tell this man's story, though, I have to first tell you about another man, a Scot named John Harper. Harper, a minister of the Gospel, boarded the Titanic with his six-year-old daughter, Nana. He planned to travel to the Moody Church in Chicago, where he'd been invited to preach for three months. When the ship struck the fateful iceberg and began to sink, Harper made sure his daughter was placed into one of the lifeboats. He then began what would be the last evangelistic work of his young life.

As the freezing waters began to fill the ship, Harper was heard shouting, "Let the women, children and the unsaved into the lifeboats." Survivors reported that Harper took off his own life jacket and gave it to another man. "Don't worry about me," he reportedly said, "I'm not going down, I'm going up!"

When the ship began to sink, more than 1,500 passengers jumped or fell into the icy waters. As they gradually drowned or froze to death, Harper was seen swimming from one passenger to another, pleading with them to accept Christ.

Only six of the 1,500 people struggling in the water were later rescued, including a man who later identified himself as Harper's last convert. This young man had climbed up on a piece of debris. Harper, who was struggling in the water near him, shouted out, "Are you saved?" "No," the man replied. Harper then shouted the words from Scripture: "Believe on the Lord Jesus Christ and thou shalt be saved." The man did not answer, and a moment later he drifted away on the waves.

A few minutes later, the current brought the two men back together. Again Harper asked, "Are you saved?" Once again, the answer was "no." With his dying breath, Harper shouted, "Believe on the Lord Jesus Christ and thou shalt be saved." He then slipped under the waves for the last time.

Then and there, the man he had witnessed to decided to turn his life over to Christ. Four years later, at a Titanic survivors meeting in Ontario, Canada, this man tearfully gave his testimony recounting how John Harper had led him to the Lord.

I don't need to tell you that this dramatic story never made it into the movie. We live in a culture that seems to be more interested in fictional stories of romance, illicit sex, and priceless jewelry than in the real romance between God and His people.

When the subject of the Titanic comes up, as it may this week* on the anniversary of the sinking, tell your friends the story of the young Scottish minister who witnessed to Christ with his dying breath. And make sure your kids know the story a well. John Harper reminds us of a great lesson, the secret of the ages: that there's more to life than mere survival.

© 2014 The Devoted Woman | Victoria Anderson
Email ThisBlogThis!Share to TwitterShare to FacebookShare to Pinterest