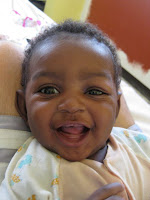 My Heart in Haiti (Day 5)
By Jennifer TheodorouMorning is so beautiful here in Haiti. As I lie here in my bed, the sun is beaming through the window and warming my face. Before it rose I was actually a little cool for the first time here. There were some pretty intense rains here again last night, with lots of thunder and lightening. Not the gentle rain that lulled me to sleep on our first night. I was reminded again of the impending hurricane season. At one point during the evening last night I looked out over the hills around us at the most intense blackness I have ever seen. The city power was out (a common occurrence here these days), and our backup generator had kicked in without so much as the blink of an eye.

Though our accommodations are no five star hotel, we are living in the lap of luxury as far as the locals are concerned. I may have killed the biggest cockroach I've ever seen, and tried to chase a cute lizard out from under our dresser, but MAN! We've got it good!

Yesterday we got to experience Apparent Project at full tilt. We awoke to the bustling of dozens of Haitians gathering to work. Their Creole chatter was energized. As I made my way through the house their curious faces followed me. I greeted them warmly with smiles and "bonjour's" all around.

Quickly I set to work on my job for the day. The jewelry boutique where Shelley sells the jewelry and other goods was overflowing! Praise the Lord, this was money to be made for these hard workers. My task was to sort necklaces according to length, group them by tens, and box them for shipping to the states. Many jewelry parties will happen with these.

I probably boxed a couple thousand necklaces, or so it seemed. As I sorted, the artists would gather at the boutique door to watch. I wondered if they knew what I was doing. At one point in the day, several of the ladies came in. Talking quietly amongst themselves they began looking through the jewelry yet to be packed, grabbed a handful of pieces and slid them onto the rack where I was sorting. Then they giggled and departed. I looked at the tags that identify who made each necklace. They had handed me their own handiwork. They wanted to make sure it got to wherever I was preparing this all to go. They know there is hope in what they are doing here.

Shelley's job is not easy here. Though her workers are diligent and determined, there is always someone looking for a handout. As Shelley and I were talking, a woman appeared with a young baby, maybe 8 months old. On the back of the baby's neck and shoulders were white patches and spots. Against the darkness of her Haitian skin it was concerning. The mother wanted money to take her daughter to the doctor. There are plenty of free doctors here since the quake, but this is an open opportunity to ask for money. The hard part for Shelley is saying no, especially in regards to a child. With free medical care available she must teach them that they can't take advantage of the situation. Shelley has seen horrifying medical needs here, both with the locals and her own family. She has rushed people to hospital in the middle of the night, seen her husband perform CPR on their own son, and ...........

Ok, you're going to think I am making this up. I kid you not, as I was typing that last sentence there was a knock at our bedroom door. It was Shelley. One of the workers, Vesline, just arrived here this morning with a very high fever, rapid pulse and labored breathing. Shelley gave her some flu meds to help, and asked if I could help with cold compresses while she went to run her son to school. I quickly dressed and hurried to the living room where Vesline was lying on the couch. Her skin was burning to the touch, she was shaking and wheezing.

Shelley decided we should just get her to the tub of water in our shower area and bathe her with the cool water. Her husband, Nobel, and baby are with her. Feeling it would be more dignified for her I offered to take the baby and let Nobel do the bathing. Slowly she made her way to the bathroom, undressed and eased into the small round tub. Her shaking intensified as the shock of the coolness against her fevered skin set in. Nobel began gently pouring glasses of water over her back, face and chest. For a moment I feared she might go into literal shock. But as I watched, her trembling gradually slowed. I could see her breathing become less labored.

My first thought was that these are classic signs of dehydration. I gave her some water and she gulped it down. When her fever seemed to have broken her husband toweled her off, she dressed and returned to the couch. I gave her some more water and encouraged her to rest.

An hour has passed since the knock on my door. Vesline's fever seems to be down for the moment. The baby is hungry and as she rests the baby feeds at her breast.

I guess God thought I needed to see this up close and personal this morning.