jonah: running away from the Lord (part 2) 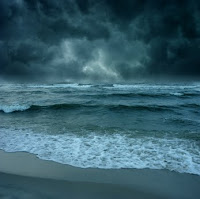 The word of the LORD came to Jonah son of Amittai: "Go to the great city of Nineveh and preach against it, because its wickedness has come up before me." But Jonah ran away from the LORD and headed for Tarshish. He went down to Joppa, where he found a ship bound for that port. After paying the fare, he went aboard and sailed for Tarshish to flee from the LORD.

Wow. That seemed almost too easy, didn't it? Jonah didn't want to go to Nineveh. As we established yesterday, Jonah hated Nineveh and did not wish to preach to the leaders of this wicked Assyrian city or see its people saved. So what did Jonah do? He ran away. He headed for Tarshish.

A stubborn Jonah traveled down to the nearest dock, bought a one-way ticket, and boarded a busy ship scheduled to cruise in the opposite direction of the place God told him to go. Because his trip to Tarshish had come together so easily, perhaps Jonah started to question what God originally commanded. Perhaps he started to consider the possibility that God may have changed His mind... that maybe He didn't wish for Jonah to go to Nineveh after all. I can just imagine Jonah as he sat back in his cabin below deck, fluffing his bed pillow, and laying down to enjoy a relaxing, peaceful excursion away from the drama of Nineveh. I can envision him justifying and rationalizing his journey. For he believed those wicked people did not deserve one more second of his time. They had already taken away so much. Instead, it was time to start new in Tarshish. Yes, the idea of a fresh beginning seemed much more appealing than sacrificially ministering to that horrible city with those horrible people.

So, as the ship began to sail, and as Jonah nestled in for the long voyage ahead, I'm certain he was quite satisfied with his decision to flee from responsibility. Sure, deep down he knew he was going against God (he even told some of his shipmates that he was running away). However, Jonah was content with his decision. In fact, I think Jonah convinced himself that his reasons to leave the scene were valid - despite their defiance to God's word. Jonah emotionally decided that he was doing the right thing... the right thing for Jonah, that is.


Then the LORD sent a great wind on the sea, and such a violent storm arose that the ship threatened to break up. All the sailors were afraid and each cried out to his own god. And they threw the cargo into the sea to lighten the ship. But Jonah had gone below deck, where he lay down and fell into a deep sleep.

The captain went to him and said, "How can you sleep? Get up and call on your god! Maybe he will take notice of us, and we will not perish." Then the sailors said to each other, "Come, let us cast lots to find out who is responsible for this calamity." They cast lots and the lot fell on Jonah.

So they asked him, "Tell us, who is responsible for making all this trouble for us? What do you do? Where do you come from? What is your country? From what people are you?" He answered, "I am a Hebrew and I worship the LORD, the God of heaven, who made the sea and the land." This terrified them and they asked, "What have you done?" (They knew he was running away from the LORD, because he had already told them so.)

Uh oh. Maybe Jonah's plan B wasn't going to work out as he had hoped. Maybe the grass of Tarshish wasn't going to be greener - just farther away from his purpose. Clearly God did not approve of Jonah's changing things willy-nilly merely because he didn't like the Master's plan. Even worse, Jonah's witness and reputation as a man of faith was now being questioned and under scrutiny. He was in the hot seat - and he had sat himself in it! These sailors wanted to know exactly who Jonah was and exactly what on earth he had done to cause such a calamity. They did not care about his past achievements or career vitae of successful prophecies. No, they wanted to know why their boat was breaking up at that moment and what they could do to correct it.

I'm embarrassed for Jonah, aren't you? Not only was his world literally crumbling around him... so was his testimony. How could he claim to be a believer of God Almighty, and then blatantly live in opposition of His authority? Really, how serious could Jonah be taken when it came to his beliefs? How serious would others receive his proclamations of faith or his acknowledgement of Jehovah when he himself didn't bat an eye to run away from God's commands? I fear, not too serious.

The sea was getting rougher and rougher. So they asked him, "What should we do to you to make the sea calm down for us?" "Pick me up and throw me into the sea," he replied, "and it will become calm. I know that it is my fault that this great storm has come upon you." Instead, the men did their best to row back to land. But they could not, for the sea grew even wilder than before. Then they cried to the LORD, "O LORD, please do not let us die for taking this man's life. Do not hold us accountable for killing an innocent man, for you, O LORD, have done as you pleased." Then they took Jonah and threw him overboard, and the raging sea grew calm. At this the men greatly feared the LORD, and they offered a sacrifice to the LORD and made vows to him. (Jonah 1:1-16)

The most comforting outcome in this section of Jonah's story is that irrespective of Jonah's disobedience and backwards faith, God still reveals Himself in the storm. He shows up and uses Jonah's blundering disregard toward His commands to ultimately draw others closer to His grace. Here God reveals His glory... period! Yes, our God will always make Himself known as the One True God irrespective of man's sin. There is no other Name mightier than His and He will use everything for His good and for the benefit of His kingdom! Hallelujah!

In desperation, the sailors threw Jonah overboard and the sea instantly grew calm. What an impact that would make, huh? Only our God has the power to calm a raging sea. Only our God has the ability to humble the roughest hearts and bring the hardest of men down to their knees in worship. Every knee... every element shall bow down to Him and know His glory. Great is our awesome God, ladies. Worthy is His Holy Name.

So far, there have been so many things to ponder as we study this first chapter of Jonah. I encourage you to pause today and pray over what God has revealed from this short book of the Bible. Ask Him to search your heart and expose anything that may be hindering your relationship with Him. Praise Him for His ongoing instruction, correction and purpose. Seek Him in every step and in every decision. He is worthy of our praise and full attention! Let's learn from Jonah's mistake and choose to faithfully trust His word and walk in His ways. It is the safest place we can be!

Tomorrow, we will begin our study at the end of chapter 1 (vs. 17) and move into chapter 2. It's gonna get fishy so come prepared to drench yourself in Jonah's prayer of repentance. See you then... XOXOXO!