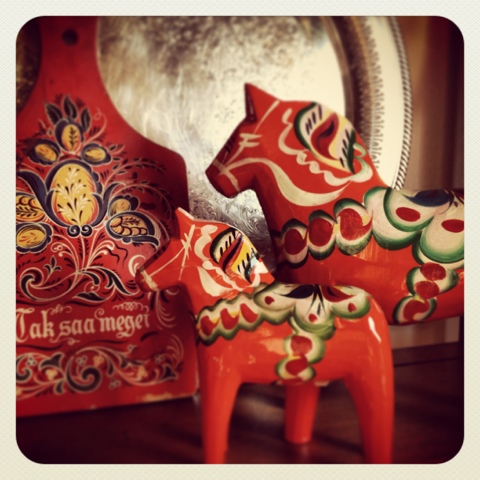 "Sweden, in the harsh winter of 1716, was at war. Many soldiers were quartered in homes in the province of Dalarna. They were cold and hungry. The story goes that one soldier carved a Dala Horse from a log of wood. He gave it to the child of the home, but before he did so, he painted it bright red and decorated the harness and saddle with kurbits. This was a biblical touch, echoing the scene in which Jonah sat in the desert and a kurbit - a gourd vine - grew round him to protect him from the sun. Carving the stocky, snub-nosed, tailless horses was already a Swedish tradition, but until then they’d been unpainted. In return for the toy, the woman of the house gave the soldier a bowl of soup. He made another horse. More soup. Word got round. Other soldiers began carving and painting horses for food. Dala horses have since become a symbol of Swedish goodwill, frugality and dexterity."

I love being Swedish and I love our simple little Dala horses!

Have a great day!