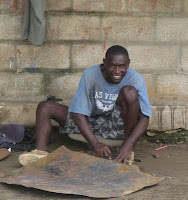 Hi DW's! As many of you already know, last week I was in Haiti on a missions trip with friends. I was part of a small group of four people who independently traveled there to help out friends at The Apparent Project. The trip proved to be overwhelming on so many levels considering the large amount of poverty and the mass rubble still present from last year's earthquake in Port au Prince. Anyway, my bunk-mate and fellow DW friend, Jennifer, wrote a daily synopsis of the experience (from her viewpoint) in order to update family and friends while we were there. I was so impressed with her writings, I asked for her permission to post them here on Fresh Flowers for the coming week. We hope and pray that these daily entries paint a real-life picture for you and bless your hearts to further help the poor, the widowed, and the orphaned as mandated in James 1:27.


Religion that God our Father accepts as pure and faultless is this: to look after orphans and widows in their distress and to keep oneself from being polluted by the world. (James 1:27)

Ladies, each one of us is able to make a difference in the lives of others! We must only be willing to follow God's call! May you be richly blessed by His love as you enjoy Jennifer's writings this upcoming week. Blessings! ~Victoria
(Pictured above: A Haitian metal worker)

My Heart in Haiti (Day 6)
By Jennifer TheodorouThe drama of yesterday morning carried through the day as Vesline's fever came and went. She spent the entire day on the sofa sleeping. We took turns keeping watch over baby Pierre, who for most of the day didn't seem quite right himself. Mama wasn't up to nursing, so he took small amounts of formula which only upset his tummy. He didn't eat nearly enough, so between hunger and gas pains, he was not a happy boy. He too spent most of the day asleep, which had us concerned.

The beautiful part of this whole ordeal was watching as Nobel, Vesline's husband care for her. In the morning when Shelley decided she needed a cool bath to break the fever, he willingly and lovingly bathed her. Pouring one cupful at a time over her chest, her face, her back. He did not leave her side for most of the day. When she gained enough strength to eat, he fed her, and held a cup at her lips so she could drink. I was touched by this obvious display of love. At one point I asked Shelley to tell Nobel that I think he is a good man. She said it was good to see this because he has not always been so loving. Perhaps her illness made him think of the loss they have already experienced. (Visit Shelley's blog for more details.) Vesline has no family aside of Nobel and baby Pierre. In the last few months she has lost her mother and brother to cholera. It is easy to understand her concern for her baby, (for) he is all she has left.

On a lighter note, I got to take a ride into town with Junior, Shelley's manager here at Apparent. He helps Shelley keep things under control here. She jokes the he is actually her boss. We needed to get some office supplies. Tape for packing boxes, markers for labeling them and staplers for tagging jewelry.

Junior is a 31 year old Haitian man, raised in New York. He completed high school in the states, did one year of college and then returned to Haiti. He loves Haiti. He has hope for change here as well. To some it might be hard to imagine leaving your family, all secure in the states, to return to this. For him it was the natural choice of following his heart.

The Apparent Project shuts down on Wednesdays to give Shelley a much needed break. Many of the artisans will bead at home and return with finished product tomorrow. This morning we are going to the artisans community of Metal Workers. I am excited about this trip. Not just for the opportunity to see all the beautiful things that they create from recycled metal materials, but because this is the dream for Apparent in action. The fundraiser we just had (in the states) was to raise money for a piece of land here in Haiti. On that land Apparent hopes to build their own artisan community of jewelry makers, seamstresses etc.

These communities become self-sustaining through the attraction of tourists and visiting missionaries. They come regularly to buy the goods they create, providing regular income for these individuals and families. Here they have shelter, food and opportunity.

Apparent is close to their goal for purchasing their land. I pray that they will be able to meet this goal soon.

Another group will be joining us at the guesthouse today, for the remainder of our time here. It will be nice to get to know some others who's hearts have been called to Haiti. Two and a half more days. I think it will be hard to leave.