my heart broken in Haiti (day 3) 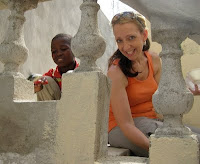 My Heart Broken in Haiti (Day 3)
By Jennifer TheodorouYesterday was a day of complex emotions for me. For the most part, it was a day of great joy. Joy found in places I would never find at home. It was a busy day of multiple tasks, all in an effort of preparation for a very special guest at Apparent Project. The new President of Haiti is said to be preparing for a visit. President Martellie, throughout his campaign stood on a platform of Job Creation and Development. He understands that without employment for the Haitian people, there are no answers to any other problems here. Obviously, someone has told him that Apparent is getting the job done.

And so, a great part of today was spent painting the entry courtyard of the Guesthouse/Artisan workshop. Well protected by some serious sunscreen and armed with a paint brush and a small bench for reaching the higher places, I set to work.

To be honest, painting is not my most favorite task at home. Painting in 90 degree heat and humidity? Something I would surely try to avoid. But here, as I worked, I found myself overwhelmed with immense joy. True happiness in my heart to be helping with such important preparations. I actually felt HONORED! I mean, imagine (if) the president of the United States was planning a visit to your home or place of business! Wow!

So, for several hours I painted by myself while the others performed other tasks around the house. After completing one area of the courtyard, and about as much sun as I could handle for the moment, I took a break. I ate a granola bar, had some water and allowed myself to cool down a bit.

The others had now joined in on a second area, so I found myself a place in the shade that needed some work. As I worked I heard a young voice, "Hello.", with a strong creole accent. I looked over to the street side window where I worked to see the sweetest face of a young Haitian boy peering in.

I greeted him, "Bonjour.", and introduced myself, "Mwen rele, Jennifer."

He introduced himself as Peterson.

He surprised me by speaking rather good English, and before long he had unlatched the gate, entered the courtyard, grabbed a paintbrush and eagerly joined in. He had obviously been here before. As we worked he made small talk, in English, and gave me Creole lessons as we went along.

Peterson is 12 and very bright. Sweetly at one point he asked me "Do you love Jesus?" With a resounding "Oui!", I answered him. He responded that he too loved Jesus and that I was his Sister. Talk about joy in my heart! Wow!

Shortly, Shelley passed by on her way home for a bit. She informed me that Peterson was the street boy she had told us about yesterday, the one who lost both of his parents in the earthquake. He has a brother and sister too, but they disappeared after the quake and he never found them.

At one point Peterson told me that he loves Shelley, and in what was a little less clear English I believe he said she is like his mama. He began to tell me about his mother and father and his voice changed, his eyes dampened. He couldn't say much. I just told him I was so sorry and put my hand on his for a moment. He nodded sadly and we went back to work. After a bit he told me he was hungry so I gave him one of the granola bars I had packed and he was content. We finished our task, looked at our handy work and concluded, "Cest Bon."... "It is good."

I looked at Peterson, covered from his fingertips to his shoulders in beige paint and asked if he would like to wash it off. With a "Yes, please." I headed off to find some baby wipes. When I returned he simply stretched out his arm and let me begin to gently wash the paint from his skin. Quietly I cleaned him up as would any mother with her own child, and it was obvious that he was soaking up every moment of this loving care.

For the next couple hours Peterson entertained us with more creole lessons and dancing to his favorite songs that another worker at Apparent played on his phone. When it was time for us to get ready to go to the Clays for dinner Peterson was reluctant to leave. As he finally resolved that he must go, he hugged me and placed the most gentle kiss on my cheek. He said "I love Jennifer", (and) asked if he would see me tomorrow. I said I would be here.

Over dinner at the Clays we talked a lot about adoption here in Haiti. The good orphanages with appropriate caretaker to child ratios, and the not so good with a 100 children and 2 or 3 caretakers. I asked about Peterson. Shelley shared that they have been trying to find a way to help him. I learned that Peterson spends his nights in the tent of a woman who has beaten him before. They don't know who she is, but that the situation is not good.

There is not much hope for Peterson. With both parents deceased and no legal documentation of birth or death certificates, he cannot enter the adoption system. Orphanages will not take him. He is not in school, and who knows how much longer this woman will let him sleep in her tent.

This day that began with such joy, was ending with such sorrow. My first heartbreak in Haiti. I know I will see Peterson again this week, and my love for him will grow, as will the desire to help him, and the reality that beyond this week here, I cannot. I will pray for him probably every day for the rest of my life, if only this were enough.